GIVE WATER, GIVE LIFE

Our news feeds have been filled in recent years with stories of well-known Christians doubting, deconstructing and sometimes even de-converting altogether. Each of their stories is unique and each case would require an individual response.

However, walking through seasons of doubt is common to all Christians. In fact, it’s perfectly normal. If you have experienced, or are currently in a time of uncertainty, know that you are not alone. Often it can seem embarrassing or perhaps overwhelming that you are struggling to trust God and believe that he is there and is good. But there is no need to be ashamed of doubt. In my experience, a battle with doubt and deconstruction often leads to a stronger faith because you are challenged to further understand what you believe and more deeply discover God.

Below I’ll briefly explore these 3 causes of doubt and how each may in fact be a pathway to a deeper faith:

1. Doubting God Because of Suffering

One of the most frequent and honest questions I’ve heard from both Christians and skeptics is: if God is good and all-powerful then why does he allow bad things to happen? This question was especially prevalent during 2020 as the world faced the unprecedented days of the pandemic. COVID-19 is just one example of the broken world we live in.

On this side of eternity, we will all experience trials and tribulations. We are never guaranteed an easy life, whether or not we call ourselves a Christian. Over the past year and a half we watched sickness, fear, death and uncertainty sweep across the planet. We are rarely in a position to know why God allows bad things to happen, which is why it is important for us to return to Scripture to understand the spiritual dynamics at work in our world.

Through human sin and spiritual deception, the good world God has created has been put out of kilter. In Romans 8, the Apostle Paul describes creation “groaning as in labor pains” but also writes a promise that one day, “creation itself will be liberated from its bondage to decay and brought into the freedom and glory of the children of God” (Romans 8:21). As Christians we are all called to be part of the adventure of setting God’s world right through Jesus Christ.

Indeed, there may be good reasons God allows us to go through the furnace of suffering and doubt. After all, it’s not God’s job to keep us safe, secure, and pain-free. God is concerned with bringing us into a relationship with Him as fully human people, often shaped by both the joys and challenges of life. Likewise, I don’t believe God actively causes suffering. On the contrary, it is humanity’s own free will that often brings about much of the evil in the world. However, I do believe that God is wise, powerful, and loving enough to use the pain of our circumstances for His greater purposes. That’s what redemption is, after all.

Of course, that doesn’t answer all our questions. The good news is that, whatever questions remain, we are called to trust in the God of the cross and the resurrection. He is the One who turned the greatest injustice and defeat in the world into the ultimate triumph. He specializes in turning evil into good. Rest in that truth when your thoughts are consumed by doubt over suffering. 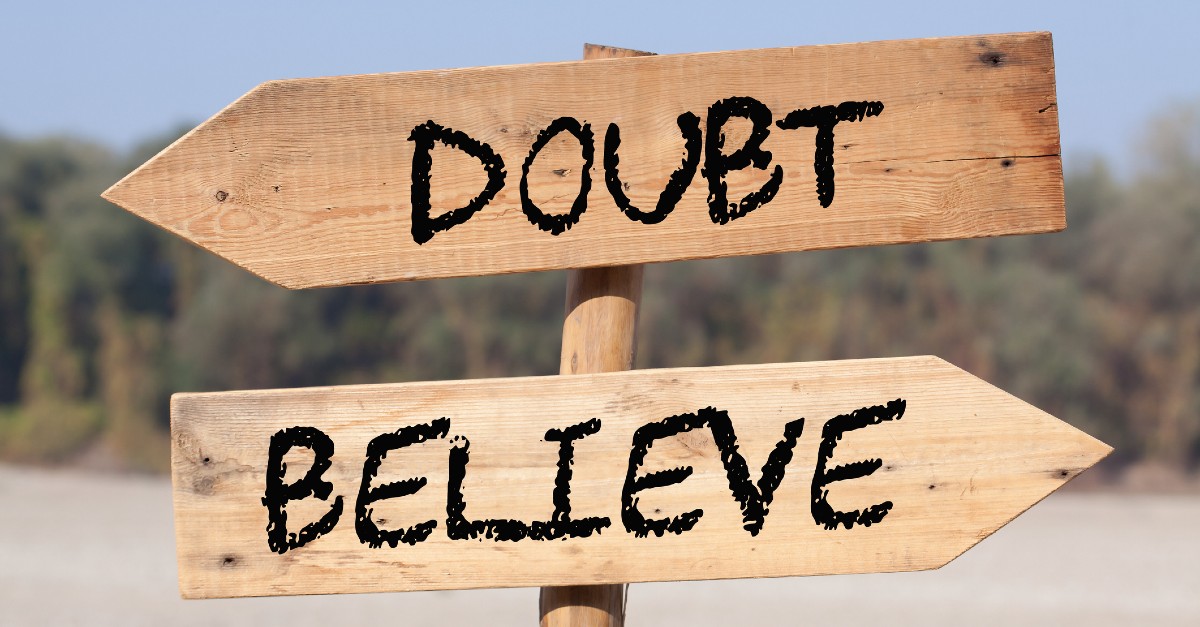 2. Doubting God Because of Lack of Faith

Living in relationship with Christ and following Him day by day is a journey. As we walk through life with Him there will be highs and lows. Trusting God is not only about praising Him in the good times but also involves staying close to him in the “valley of the shadow of death,” when we can barely make out his outline. But I do believe he is always there, no matter our circumstances. Questions and uncertainty will inevitably occur as we learn to trust in a God we cannot physically taste, touch, and see.

We often crumble when storms come our way because we’ve avoided facing up to or dealing with pre-existing doubts. Christians have a tendency to desire a bubble-wrapped faith, sealed from challenging questions, so then we succumb to doubt at any inconvenience or crisis. In many ways, that has been the purpose of the Unbelievable? show and podcast I host on Premier Christian Radio where Christians and non-believers are brought together for an hour of conversation for listeners to wrestle with questions, hear from 'the other side' and deal honestly with doubts.

However, doubt can fuel the fire to strengthen your faith in the long run.

I interviewed Jim Thring who spent over ten years as an atheist after leaving the Christian faith because of doubts sparked by New Atheism. But he recently experienced a remarkable return to Christianity after realizing that his newly acquired atheist worldview wasn’t equipped to explain everything:

“I realized that my atheism had as much of a powerful belief behind it. The maxim that there is a materialist explanation for everything is also a very powerful belief. I think I started to try and be honest about where my atheism lay, what supported that and reconsidered it again.”

The gentle witness of Christian friends who continued to love Jim through his season of deconstruction, along with a discovery of the strong intellectual tradition of Christianity, were key to his reconstruction:

3. Doubting Jesus Because of a Lack of Historical Proof

I believe that Christianity stands apart from the other major world religions because its historical claims hold up to scrutiny, something which cannot necessarily be said about all other worldviews.

The historical evidence for the life, death and resurrection of Jesus is very solid. When looking at other key historical figures of the ancient world, there are typically only a handful of documents that detail their life. In addition, those pieces of evidence were usually written down decades or even centuries following the events.

In contrast, the four gospel accounts are estimated to be written within 30 to 60 years after Jesus’ life, and many letters by Paul that witness to the events are even closer to the life of Jesus. There are thousands of surviving manuscripts from which, through the science of textual criticism, scholars are able to assemble with extraordinary accuracy what the original documents said. To this you can also add the extra-Biblical accounts of Jesus and the early church by contemporary writers such as Josephus and Tacitus.

Even more fascinating, it has become increasingly well known that the details of the Gospels themselves confirm their accuracy and reliability when it comes to their knowledge of geography, historical events and characters, and details of local customs and culture.

New Testament historian Richard Bauckham’s “Jesus and the Eyewitnesses” was a groundbreaking piece of scholarship that reveals how the academic sphere has shifted away from default skepticism, in contrast to the popular view of the general public. His research communicates how the Gospels themselves are filled with evidence that the authors were reporting eyewitness accounts of the very first followers of Christ.

One example is the names used in the New Testament. The frequency of names was cross-checked with Israeli scholar Tal Ilan’s research where a correlation found that the Gospels are full of the same names that were common during the times and in the places where Jesus lived. A small scriptural detail like this use of names supports the conclusion that the Gospels were recorded by people alive in that specific time – not invented at a later point.

These kinds of historical evidence may be the starting point to climb out of the pit of doubt in which some people find themselves. Of course, simply listing historical evidence for the life of Jesus won’t lead to a life-affirming faith. It’s only when we put our beliefs into practice – lean on them to see if they will take our weight – that faith truly comes alive.

I heard a helpful maxim about bravery recently: "Being brave doesn't mean that we don't get scared. Bravery means doing the right thing even when we are scared." The same idea can be applied to our faith journey. Having faith doesn't mean living without any doubts. Faith is about trusting in God even in the presence of our disbelief. The good news is that, whether emotional or intellectual, God welcomes us with all our questions and doubts and by his grace can use it all as a pathway to relying on Him in new and unexpected ways.

Justin Brierley is the Theology and Apologetics Editor for Premier Insight which produces podcasts such as “Unbelievable?” and “The Big Conversation” in which he hosts discussions between people of opposing views on issues of belief, life, science, and meaning. He is the author of “Unbelievable? Why, after ten years of talking with atheists, I’m still a Christian.”

This content first appeared on Crosswalk.com and is used here with permission. To view the original visit: https://www.crosswalk.com/faith/spiritual-life/ways-doubt-can-lead-to-the-reconstruction-of-our-faith.html